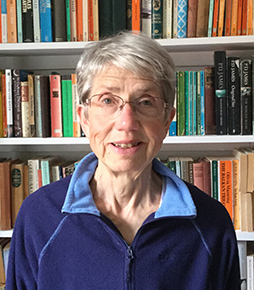 Sandra’s last post before retiring was Library Manager at the Royal Society, London. It is a wonderful library particularly for 17th and 18th century science, for which they are an international centre of excellence. This gave Sandra a thirst for exploring the history of reading, books and libraries. Sandra lived in the north-east of Scotland for about 14 years after she retired and there, she was lucky enough to join a team of volunteers cataloguing two fascinating family libraries, one dating from the 15th century, the other mainly the 18th century.  Sandra continues with huge enjoyment to research both. For the older one Sandra is currently trying to reconstruct the library that existed in 1756 - much remains in the castle where it has always been but a goodly number went off to an acquisitive bunch of monks! Sandra knew the Guildford Institute from doing courses and so when the chance came to use her library background and volunteer in the Library, she jumped at it. Sandra’s specific projects include indexing scrapbooks to make them available online and upgrading the catalogue of the Institute’s original book collection (from the early days of the Institute). Sandra enjoys the interesting work as well as having a good group of people to work with.